The terms “asphalt” and “bitumen” are often used interchangeably to mean both natural and manufactured forms of the substance. In American English, “asphalt” (or “asphalt cement”) is commonly used for a refined residue from the distillation process of selected crude oils.

Residues from the distillation of meticulously selected crude oils provide the base materials for bitumen production. Bitumen refining separates the lighter fractions from the residues. Several manufacturing methods are used to produce specification bitumen depending on the crude source and processing capabilities available. Often a combination of processes is selected. The illustration shows a compilation of the main refinery processes employed. 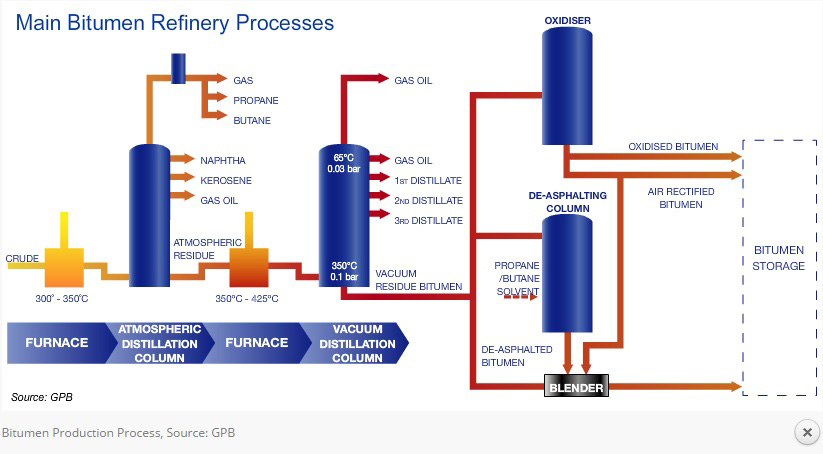 Of the wide variety of crude oils commercially available, only a limited number are considered suitable for producing bitumen of the required quality in commercial quantities. In general, these are heavy crude oils with high sulfur content.
Nowadays, bitumen obtained mainly from oil. There are two general ways to earn bitumen from oil.

In the first method, depends on food and way of refining, after distillation in the vacuum condition, bitumen with suitable physical characteristics for making roads and industrial applications obtained.

This process involves crude oil being heated to temperatures of between 300 and 350 degrees Celsius, to separate lighter fractions from the non-boiling component, known as an atmospheric residuum. The lighter fractions are drawn off and sent to other refinery units. To remove the last traces of the lighter fractions and avoid thermal transformation of the molecules, the atmospheric residue is then introduced into a vacuum distillation unit, where the pressure reduction lowers boiling temperatures and avoids unwanted thermal cracking of the molecules. The pressure and temperature conditions within the vacuum process determine the hardness of the residuum and, as such, the grade of bitumen produced.

Specific solvents can also be used to separate the lubricant and bitumen components of crude, without changing their chemical structure. Depending on the solvent used – propane or butane – different categories of bitumen can be obtained. By controlling the variables in the vacuum distillation process, bitumens with varying degrees of hardness can be produced. Needle penetration and softening point Ring and Ball are the two fundamental defining characteristics of bitumens produced to engineering specifications.

In the second method, obtained vacuum residue, usually, has very low viscosity and the high degree of penetration of 300-400 mm. The product has low asphaltene, so it is not suitable for making roads in tropical and temperate regions.
Oxidized bitumen has a distinctive consistency at room temperature and a rubbery nature which affects how it responds to stress or imprint. The process of oxidation increases the stiffness and softening point of the bitumen and considerably alters key physical properties. Varying the length of the oxidation or air blowing process varies the extent of the reaction and produces distinctive end products.

To convert bitumen shaped residue to bitumen with suitable physical properties, during a process, heavy molecules like asphaltenes should be added. To do this, air that is combined with different types of gasses like oxygen, nitrogen, co2 etc been pressed by a compressor and it has been injected to a tower containing molten bitumen upper than oc200. The process can be continuous or batch. The so-called semi-aeration process causes the production of semi-blown bitumen with suitable penetration degree and softening point 100/85 or 70/60 which is used in road making and moisture barrier of houses.

If in that unit or next unit, the process of aeration being continued, gradually, penetration degree of bitumen is decreased and its softening point increases. The result is blown firm bitumen with very low penetration and so high softening point like 110/10, 90/15, 85/25. These types of bitumen are used in buildings and additives in moisture barriers.

Types of Bitumen and their Properties and Uses
The bitumen can be classified into the following grade types:

The penetration grade bitumen is refinery bitumen that is manufactured at different viscosities. The penetration test is carried out to characterize the bitumen, based on the hardness. Thus, it has the name penetration bitumen.
There are different types of bitumen available with different properties, specifications and uses based on requirements of consuming industry.
The specification of bitumen also shows variation with the safety, solubility, physical properties, and the durability.
To understand the performance of the bitumen when it is on service, the design of physical properties of the material is highly essential. The standard testing methods are carried out to grade bitumen.
List of Bitumen Types:
ASTM D 946 – 40/50, 60/70, 80/100
BS EN 12591 – 35/50, 50/70, 70/100
Specification Tables for the types of Bitumen
Penetration Grade Bitumen Specification (AASHTO M 20 and ASTM D 946) 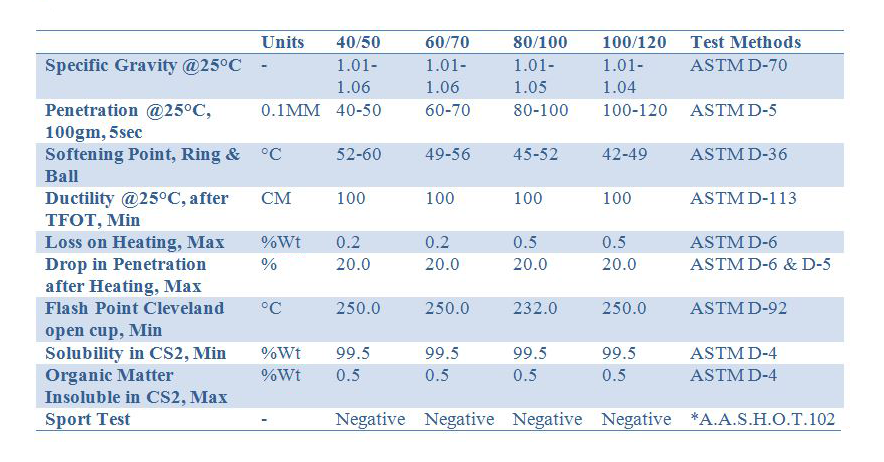 The refinery bitumen is further treated by the introduction of processed air. This will give us oxidized bitumen. By maintaining a controlled temperature, the air is introduced under pressure into soft bitumen.
Compounds of higher molecular weight are formed by the reaction of this introduced oxygen and bitumen components. Thus, the Asphaltenes and the Maltenes content increases resulting in a harder mix. This harder mix has a lower ductility and temperature susceptibility.
The oxidized bitumen is used in industrial applications such as roofing and coating for pipes. By this method of processing, the bitumen that has a lower penetration can be manufactured, which can be employed for paving roads 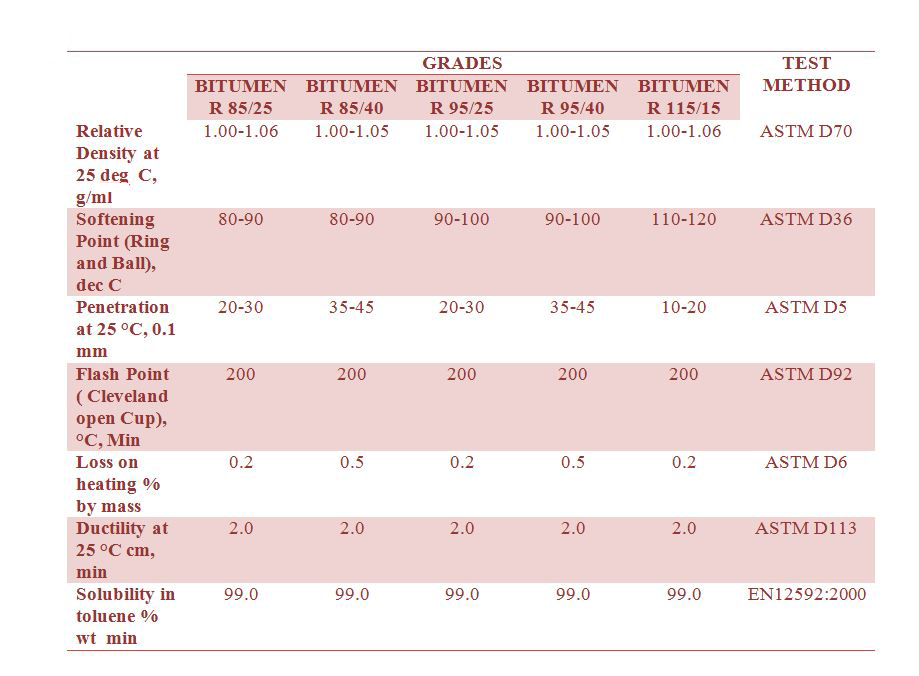 These are a grade of bitumen that comes under penetration grade bitumen. This type of bitumen has a temporarily reduced viscosity by the introduction of a volatile oil. Once after the application, the volatile material is evaporated and bitumen gain its original viscosity.
The penetration grade bitumen is a thermoplastic material. It shows the different value of viscosity for different temperature. In areas of road construction, it is necessary for the material to be fluid in nature at the time of laying i.e. during surface dressing.
It is also essential for the material to regain back to its original hardness and property after setting. This is ensured by cutback bitumen. The fluidity is obtained for any bitumen by raising the temperature. But when it is necessary to have fluidity at lower temperatures during surface dressing, cutback bitumen is employed.
The time for curing and the viscosity of cutback bitumen can be varied and controlled by the dilution of volatile oil, and the volatility of the oil added.
70/100 or 160/220 pen bitumen that is diluted with kerosene are the main composition of bitumen in the construction of roads in the UK. The standard tar viscometer is used to test the standard viscosity. 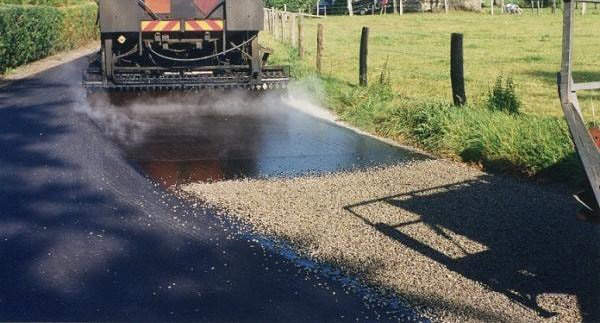 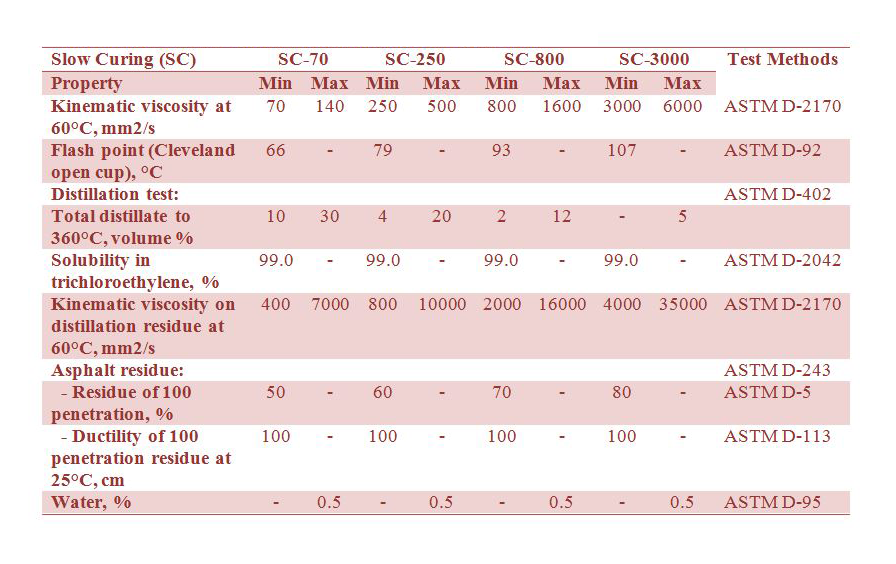 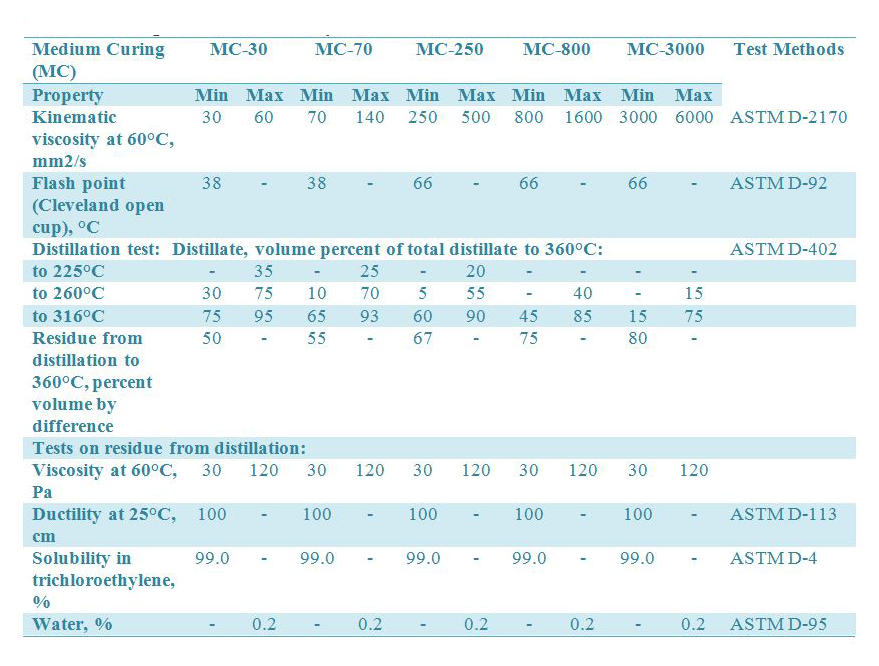 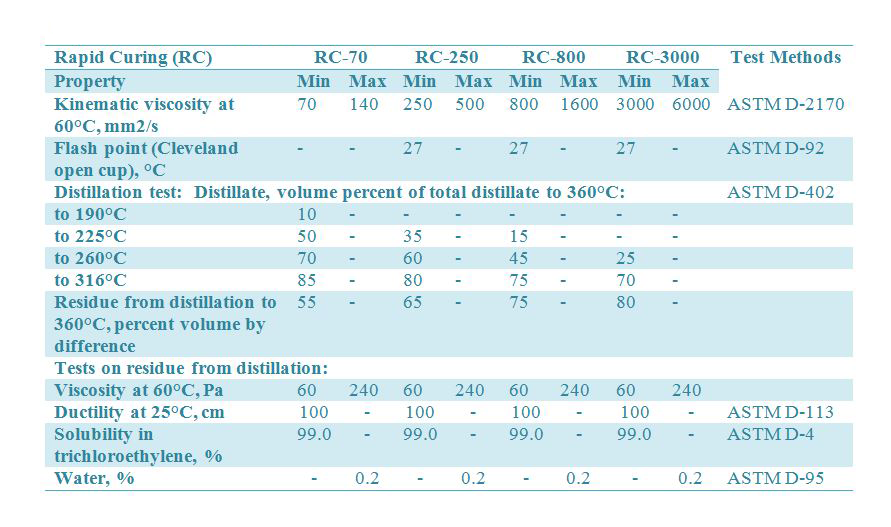 The this type of bitumen forms a two-phase system with two immiscible liquids. One of them is dispersed as fine globules within the other liquid. When discrete globules of bitumen are dispersed in a continuous form of water, bitumen emulsion is formed.
This is a form of penetration grade bitumen that is mixed and used for laying purposes.
An emulsifier having a long hydro

As shown in figure below, the hydrocarbon binds the bitumen globules strongly and the ionic part is seen on the surface of the globules. Depending on the ions present, the droplets take a charge.
The emulsions can be cationic (positive charge) or anionic (negatively charged). The globules of the same charge hence repel each other, making the whole system stable. To facilitate adhesion with the aggregates (that are negatively charged), cationic emulsions are more preferred. 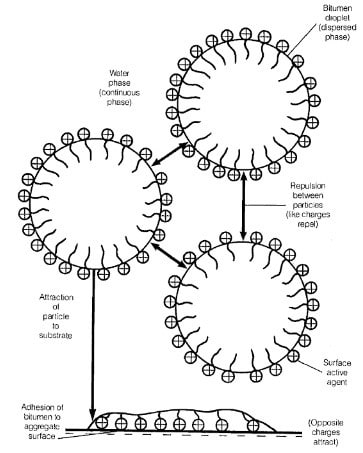 The stability of emulsions is dependent on the following factors:
Types of bitumen emulsifier and its quantity
Water evaporation rate
Bitumen quantity
Bitumen globules size
Mechanical forces
The emulsions are applied by using sprays. For this viscosity is a primary concern. With the increase of bitumen content, the mixture becomes more viscous. This is found to be sensitive when the amount exceeds 60%. 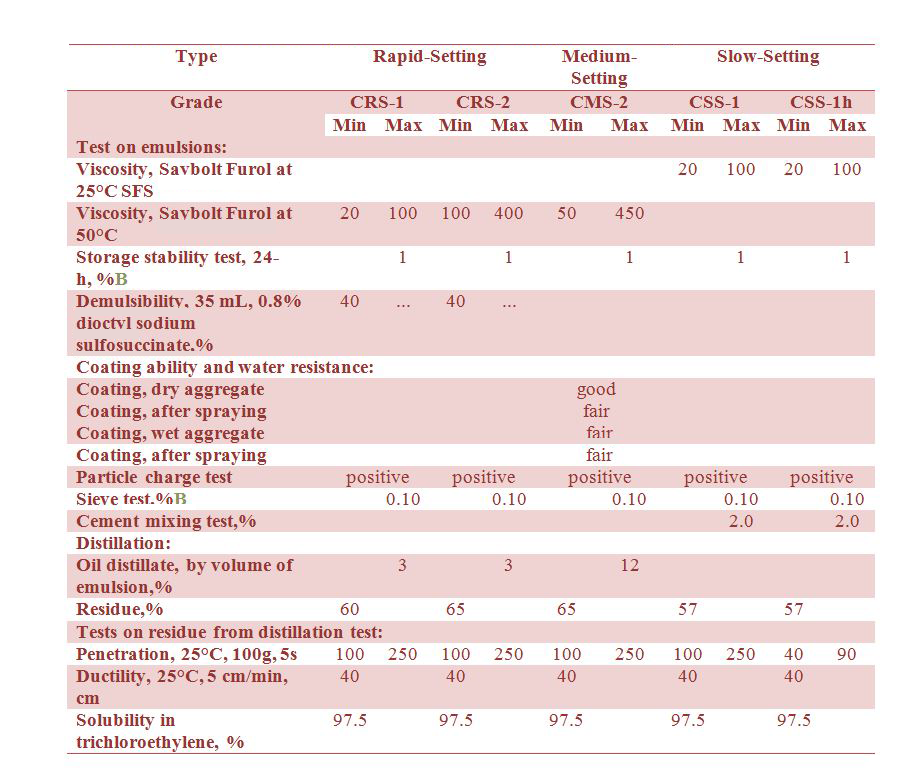 Polymer modified bitumen is the type of bitumen obtained by the modification of strength and the rheological properties of the penetration graded bitumen. Here for this 2 to 8% of polymer is added. 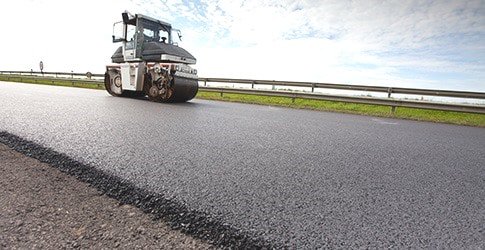 The polymer used can be either plastic or rubber. These polymers vary the strength and the viscoelastic properties of the bitumen.
This is achieved by: